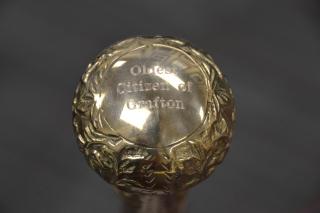 The Boston Post Cane tradition was established in 1909 by the Boston Post newspaper. A special cane was presented to the Board of Selectmen in 431 towns in New England, to be presented as an honor to each town's eldest resident. The recipient held the honor as long as he/she lived. Upon his or her death the cane would be awarded to the next eldest resident.

Grafton was a recipient of this cane and the award is being re-established this year (2022). Although the original cane has been lost, it has been replaced by a replica cane.

The Town of Grafton would like to re-start our Towns tradition of recognizing one of our eldest citizens with recognition of The Boston Cane. The cane would belong to the Town and not the resident who is named in order to provide for the reservation and public awareness of the tradition and protection of the cane from loss or damage.

The Select Board or his or her designee shall present the eldest resident with a proclamation, lapel pin and have their picture taken to be shared with the local media and on the town's website. The name of the honoree to be inscribed on a plaque to eventually be displayed along with the Boston Post Cane at the Town Offices.

"Do not regret growing older. It is a privilege denied to many." - Author Unknown

The holder of the Boston Cane Award must be the eldest known resident based on local census data and must reside in the Town of Grafton for a minimum of 5 years. The term 'resident' refers to a person who intends to physically reside at a fixed, permanent and principal home in the town.

Method to Search for Oldest Resident

Local census data will be used to determine the eldest citizen and the number of years residing in town.

The Grafton Select Board or his/hers designee shall present Grafton's eldest resident with a proclamation and lapel pin signifying the honor at one of their scheduled meetings. In addition, the honoree will have their picture taken to share with local media and on the town's website.

The recipient will retain this honor as long as he/she lives even though another resident may become eligible.

In August of 1909, Mr. Edwin A. Grozier, Publisher of the Boston Post, a newspaper, forwarded to the Board of Selectmen in 700 towns (no cities included) in New England a gold-headed ebony cane with the request that it be presented with the compliments of the Boston Post to the oldest male citizen of the town, to be used by him as long as he lives (or moves from the town), and at his death handed down to the next oldest citizen of the town. The cane would belong to the town and not the man who received it.

In 1924, Mr. Grozier died, and the Boston Post was taken over by his son, Richard, who failed to continue his father's success. Competition from other newspapers, radio and television contributed to the Post's decline and it went out of business in 1957.

The custom of the Boston Post Cane took hold in those towns lucky enough to have canes. As years went by some of the canes were lost, stolen, taken out of town and not returned to the Selectmen or destroyed by accident.

In 1930, after considerable controversy, eligibility for the cane was opened to women as well.